Reports are out claiming that former Arsenal defender Martin Keown feels John Terry’s career with Chelsea is in its final days. 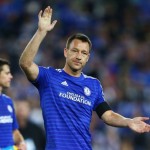 Terry was hooked at halftime of Chelsea’s defeat at Manchester City on Sunday.

Keown told the Daily Mail: “It was a very public dethroning of Chelsea’s captain and I’m sure Terry will feel he was unfairly singled out by his manager. He wasn’t the only defender having a bad day.

“When I saw Mourinho berating Terry from the sidelines at the Community Shield, I feared for him. Jose subbed him off then and it was Terry in Mourinho’s firing line again on Sunday.

“He struggled to cope with the pace of City’s attack but that’s because the whole defence was left exposed.

“With only Nemanja Matic to try to shield the back four, what did Mourinho expect to happen?

“For such a fine tactician it was a strange approach to take. And the substitution felt as if he wanted to magnify Terry’s mistakes in order to highlight the need for new blood.

“Terry is a proud man and plenty of Chelsea fans and people at the club will feel for him. But unless there is a complete change of mood from Jose, it seems Terry is fighting a losing battle.”