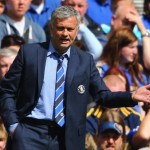 It has been reported that Jose Mourinho was delighted to see the Chelsea fans send Steven Gerrard off with a standing ovation on Sunday.

The Liverpool captain scored in the 1-1 draw at Stamford Bridge in his final clash with the Blues before he leaves the Premier League for MLS side LA Galaxy in the summer.

The Portuguese tactician felt the reaction from the Chelsea faithful was well-deserved while praising Gerrard for such a wonderful career with Liverpool.

“I think Stamford Bridge was fantastic,” he told Sky Sports.

“To get an ovation at Stamford Bridge is very special for him. It shows exactly what I’m saying – we have lots of respect for the top guys.

“I have seen the end of amazing players and I am always hurt by that.

“This is modern nature. We can’t stop it but we can get great memories of our great opponents.”