It has been reported that Chelsea boss Jose Mourinho is not surprised by former Barcelona midfielder Cesc Fabregas’ stunning start to the season. 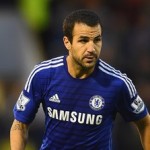 The Portuguese tactician puts Fabregas’ time at Arsenal along with his happiness at being back in the Premier League as the reasons behind the 27-year-old’s successful return.

“This is a league that he knows, that he had played in for years (with Arsenal). He was moulded there.

“When he came to Chelsea he was very happy to come back to this league.

“When a boy is happy, he doesn’t suffer any kind of pressure, he knows that his coach trusts him, knows that his mates admire him, feels important – [his form is] not a surprise to me.”