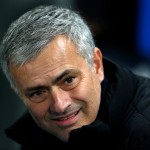 It has been reported that Real Madrid president Florentino Perez believes they owe Chelsea boss Jose Mourinho for this year’s success.

Mourinho left Real in 2013 to guide Chelsea for a second stint.

“With Mourinho, Real Madrid took a qualitative leap,” Perez said. “There was a change in terms of intensity and excitement.

“From time to time Mourinho sends me a message. He congratulated me for (Real) winning the Champions League.”