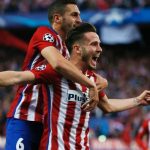 It has been reported that new Manchester United boss Jose Mourinho has put Atletico Madrid hero Saul Niguez top of his shopping list.

The Daily Star says United have been instructed by Mourinho to sign Atletico Madrid’s Niguez.

Mourinho wants to recruit 21-year-old Niguez and nurture him into a star alongside the club’s existing youngsters, Anthony Martial, 20, Jesse Lingard, 23, and Marcus Rashford, 18.

It is claimed Niguez has a release clause of £54million.

Mourinho has already met with executive vice-chairman Ed Woodward to discuss potential transfer targets and Niguez is said to be at the top of his wish list.