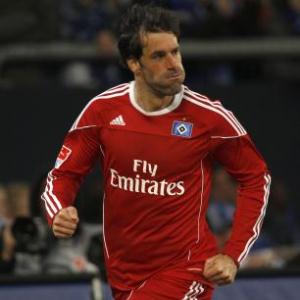 Real Madrid boss Jose Mourinho has revealed that he will not rule out the re-signing of Hamburg striker Ruud van Nistelrooy.

The Manchester United legend has been linked with a shock return to Madrid in recent days.

Mourinho said: “Many names are being talked about and they could all be a help for us.

“If in the end it is Ruud then I would be very happy. We know each other from English football, in my first seasons (at Chelsea), I know the player and the person well. I would be delighted if it is him.”

Mourinho added of the prolific forward, who this evening scored Hamburg’s winner against Schalke in the Bundesliga: “At the moment he is a Hamburg player and we need to respect that situation.

“I don’t want to talk of Van Nistelrooy. For you (the media) it’s easy. I have to respect Hamburg.”