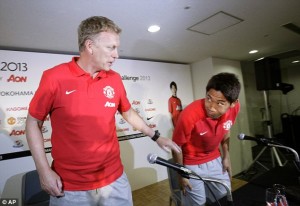 David Moyes has confirmed that Manchester United have made a second bid for Cesc Fabregas and has warned that he is not ready to give up on his pursuit of the Barcelona star.

United manager Moyes said at a press conference at Yokohama’s Nissan Stadium today that chief executive Ed Woodward is still in touch with the Spanish club about Fabregas after submitting a second bid thought to be in excess of £30million, which would be a new club record.

Asked if there comes a point when United will move on to other targets, Moyes admitted there was but said that point hadn’t come yet.
‘I think a point does come [when you give up on a transfer target] but I think when you are interested in good players you want to give it every opportunity to materialise.
‘And I’ll do that. I’ll hope that things can continue to try to move forward.
‘At this moment in time I can only tell you that Ed Woodward is working hard to make the deals happen and we’re hoping some of them will fall into place shortly.’
He also added that he could understand the anxiety of United fans still waiting for the first big transfer of the Moyes era. So far, United have not made any new signings this summer other than Uruguay Under 20 defender Guillermo Varela.
‘I can understand that [anxiety], but there isn’t any real update I can give you. But I can understand why that might be the feeling.
‘But I think everybody had thought this might be the summer – with there being quite a few changes – my new position, other managers at other clubs, and it might be that the transfers are later in the month, and I think that was always the thought I had when I came into the job.

‘And you’ve got to remember I only started the job on July 1 as well, so in truth I’ve only been in this job for three weeks at this moment in time.’

The United squad has been joined in Tokyo – the third leg of their tour – by Japan forward Shinji Kagawa and by English duo Ashley Young and Chris Smalling, who have been injured.

Wayne Rooney Charged By The FA For Foul Language