It has been reported that Bayern Munich striker Thomas Muller admits rejecting Manchester United over their poor Champions League prospects. 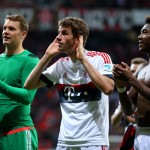 United made a major bid for the German last year.

“Yes, there were offers from other clubs,” Muller told AZ. “But when you look at the sporting aspect, Bayern are among Europe’s best three clubs together with Barcelona and Real Madrid.

“The English clubs obviously have a lot of money, but it remains to be seen whether they can return to the European top.

“It was an easy decision to sign a contract renewal from a footballing point of view.”