It has been reported that Ander Herrera was delighted with his successful spotkick in Manchester United’s win over Liverpool. 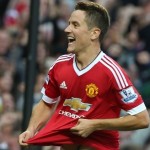 The Spanish midfielder showed few nerves when hammering his spot-kick past Simon Mignolet to double Manchester United’s lead after he was fouled by Joe Gomez inside the box.

When asked if he had taken one before, he replied: “Never, never. But the manager last season gave me the confidence. He told me I had the quality to take penalties and I have practiced every week. And, today, when I received the penalty, I thought the number-one taker isn’t on the pitch, I’m the second taker so I’m happy for that. But, next time, if the number-one taker is on the pitch I won’t be taking it.

“I tried [put some force behind it] because I knew in advance that [Simon] Mignolet is a big keeper, very tall and very elastic. I tried to hit it as hard as possible and it was a good goal but the most important thing was the win.”