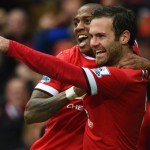 Ahead of the trip to Stamford Bridge to take on old club Chelsea on Saturday, midfielder Juan Mata has revealed that he is happy at Manchester United.

The Spanish international was voted Chelsea player of the year for two consecutive seasons in 2011/12 and 2012/13 but after the arrival of Jose Mourinho in the summer of 2013, he found opportunities hard to come by and finally moved to Old Trafford.

“My first two seasons at Chelsea were amazing,” Mata said.

“I settled down so quickly, the fans were unbelievable, the club too, so the last six months were difficult because I didn’t play as much as I wanted but I respect that.

“Jose is a very big, very good manager. The squad is unbelievable, they have top, top players, they have one of the best squads in the Premier League so I respect my teammates.

“I tried my best in training and in every game with the minutes that I had but when United came it was a great option for me to carry on with my career.

“I just wanted to go to a place where I feel happy. And I am now. This is a massive club and this move is perfect for me.”