Reports are out claiming that Lyon midfielder Nabil Fekir admits he’d prefer a move abroad once he chooses to leave the French giants. 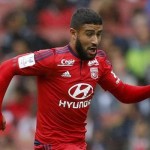 Fekir has spoken enthusiastically about Manchester United, while his father says he would prefer he join Arsenal over Manchester City.

The midfielder has also been linked with PSG, but admits they’re not a priority.

“PSG? Why not in the future? You never know … But to be honest, I would rather have an experience abroad after OL.

“You have to be ready, be prepared for everything in life and in football.”