Nacho Monreal insists injuries are no excuse for Arsenal. 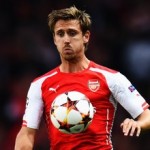 The 28 year old Spanish international admits the situation is far from ideal but, ahead of a trip to Anderlecht on Wednesday, believes Arsenal boast the strength in depth to ensure that absentees do not become ‘an excuse’.

He said: “The Champions League is THE competition for club teams.

“Injuries are a handicap to us but if we do want to go through we are going to need everyone playing at the top of their game.

“We will not use injuries as an excuse. The squad is 24 or 25 players and the rest of the squad has to come in and maintain our level. We won’t use it as an excuse.

“I haven’t played much as a central defender, I’m naturally more of a left-back, but if the manager wants me to play there, I would do my best.

“Injuries affect all teams but we have had some bad luck. Many of our important players are out and that obviously has an impact.”