It has been reported that Arsenal defender Nacho Monreal is backing Hector Bellerin for a big career. 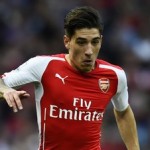 The teenager has established himself in the first-team squad this season and produced an assured display against Hull City at the weekend.

“[Hector] had a great performance,” he told Arsenal Player.

“He’s been training with us all season, so we know exactly what he can do and what type of potential he has.

“He took his opportunity in pre-season and he did it again on Saturday. He had a great game.

“He’s very young and he has a long way to go in his development. Given that he is so young and he does have such potential, I think he’s going to have a great career ahead of him.” Oxlade-Chamberlain Rates Flamini As Arsenal Man Of The Year