Reports are out claiming that Nacho Monreal is ready to pen new terms with Arsenal. 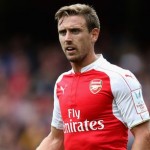 El Mundo Deportivo says Monreal is on the brink of signing a new contract at Arsenal.

The left-back will snub a return to La Liga and sign a two-year extension worth £75,000-a-week.

Athletic Bilbao were understood to be interested in the £6m-rated defender, but he has verbally agreed to stay at the Emirates. Arsenal, Roma Target Adrien Rabiot To Make PSG Decision At The End Of The Season