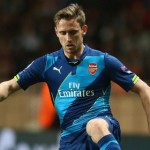 Reports are out claiming that Nacho Monreal has turned down a new contract offer from Arsenal.

AS reported that Monreal has snubbed a contract extension at Arsenal in favour of a return to Spain.

The full-back, who has also played at centre-half in emergencies, has been linked with moves to both Atletico Madrid and Athletic Bilbao.

It is believed that Arsene Wenger will now listen to offers for the defender, but will only sell the player if the price is right and he feels he has suitable replacements.