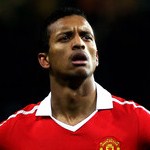 Nani has declared that Manchester United cannot think about their games against Chelsea too soon.

The business end of the season sees United and third-placed Chelsea, nine points behind with a game in hand, clash in the first leg of their Champions League quarter-final on Wednesday.

However the Portuguese international said : “No one in the dressing room is thinking about Chelsea yet – only West Ham.

“The real truth is every match between now and the end of the season is like a cup final. We can’t give our rivals anything.”