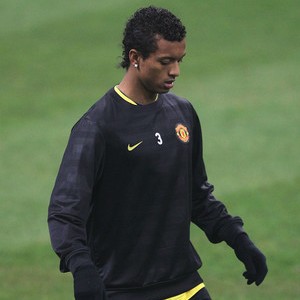 Manchester United winger Nani has expressed his delight with his playing return in their defeat to Kansas City Wizards.

The Portuguese international winger played 68 minutes at the newly-renovated Arrowhead Stadium, but the scorching Missouri heat took its toll on the winger, who admits he was left yearning for some old-fashioned Manchester weather.

Nani told MUTV : “It was hard for me to play in this weather,”.

“When we are in England we cry because it’s always raining and it’s very cold, but now we miss the English weather!”

He added: “When I missed the World Cup it was a very bad time. But I was thinking, ‘I can’t wait for the season again so I can play and score goals and feel the crowd behind me again’.

“Now I’m so happy to be back and I hope to get fit as quickly as possible because I want to play well this season.”