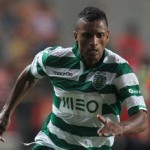 The Portuguese international has revived his career at Sporting this season.

And he won’t shut down the prospect of playing again for United.

On United, he said: “If they ask for my return it is because they recognise that I’m doing well and that I could be an asset to the club at the moment.”