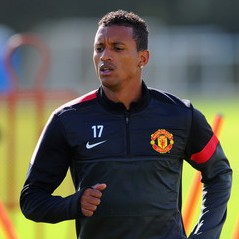 Reports are out claiming that Manchester United winger Nani has been ruled out for 10 days with a hamstring injury.

The Portugal international suffered the problem during Wednesday’s Champions League 3-1 victory over Braga.

“Nani is out with a tight hamstring. It will be about 10 days,” said boss Sir Alex Ferguson.

Central defender Jonny Evans is struggling with a groin injury for this weekend’s game against Aston Villa, which could mean a second game in four days for Chris Smalling.

“Jonny is a doubt,” said Ferguson.

“It is not a serious one. We are monitoring it and hopefully he will be OK.”