Nani Set For New £130,000 A Week Contract At Manchester United 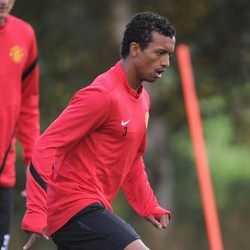 It has been revealed that Manchester United are ready to upgrade Nani’s contract.

The Sun reported that the Premier League champions plan to move the Portuguese winger, already on £90,000 a week, up to the next tier of their pay-scale alongside the likes of Nemanja Vidic and Rio Ferdinand on a reported £130,000 a week.

Both Milan clubs and Juventus are showing interest in a summer raid.

However United top brass have pencilled in talks with Nani’s representatives for early in the New Year, when the 24-year-old has 18 months left on his contract.

Boss Sir Alex Ferguson will resist any attempts to cash in on the £30million- rated star, who he signed from Sporting Lisbon for £18.5m in 2007.

That is likely to mean an improved four-year deal.