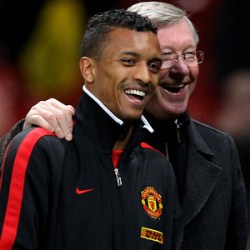 Reports have emerged that Manchester United are ready to hand Nani a bumper new contract.

The Sun has reported that the Premier League champions are to open talks with the Portuguese international over a megabucks new four-year deal — worth a whopping £130,000 a week.

It is said that the Red Devils are ready to spend after raking in a record £175million profit in six months.

United also cut their debts in the second half of last year with the money owed to the Glazer family, under the terms of their takeover, reduced from £508m to £439m.

He is perfectly happy at Old Trafford — despite interest from Juventus and AC Milan — and there are no problems over the terms of his offer.