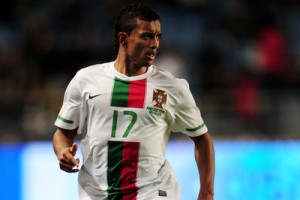 Manchester United winger Nani has told Steven Gerrard that he is wasting his time if he thinks he can win silverware at Liverpool.

The Portuguese international winger already has enough gongs in his short Manchester United career to make Gerrard green with envy.

Ahead of tomorrow’s noon showdown, Nani told reporters that : “I do not know about the intentions of Steven Gerrard this summer but it is normal that a player with his quality desires to win titles and if this doesn’t happen in Liverpool he could think about leaving.”

In-form Nani, now age 23, said that Gerrard will have nothing to celebrate tomorrow, either, with Manchester United ready to slap Liverpool back down after the Merseysiders’ morale-boosting Europa League victory over Lille.

Nani also added that : “I bet we do not lose one match at Old Trafford until the end of season.”