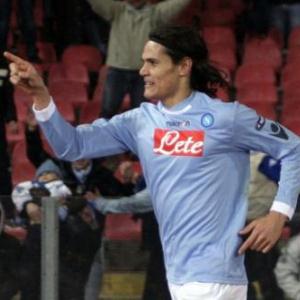 Edinson Cavani scored at the death to hand Napoli a 1-0 victory over Steaua Bucharest and a place in the last 32 of the Europa League.

Steaua thought they had succeeded in holding the Italians to a draw at the Stadio San Paolo which would have been good enough for them to progress but Uruguay forward Cavani had the last say deep in injury time.

Napoli ended the game with 10 men after captain Paolo Cannavaro was handed his marching orders one minute from time for a second yellow card.

With the result, Napoli finished second in Group K, one point clear of Steaua, and joined pool winners Liverpool in the next round.