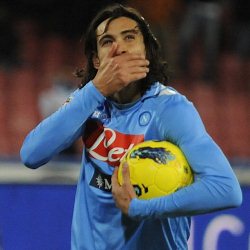 Napoli missed out on the chance to make ground on the title-chasing pack in Serie A when they were held to a 1-1 draw by Bologna at the Stadio San Paolo.

A defensive lapse allowed Robert Acquafresca to put the away team ahead against the run of play just before the quarter hour mark.

Though Walter Mazzarri’s men continued to have the better of proceedings against their struggling opponents, it took Edinson Cavani’s penalty kick 19 minutes from time to finally pull them level.

And it was Bologna who came closest to finding a dramatic late winner, with Marco Di Vaio scuppering two opportunities to pull his side further away from the bottom three with an upset.

The draw is nonetheless a valuable one for Stefano Pioli’s side, pulling them up one place to 16th ahead of Siena and four points clear of the relegation zone.