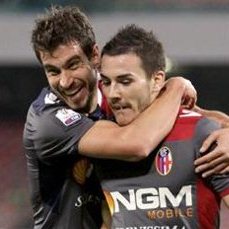 There was drama in Naples though as Bologna sneaked past Napoli with another late goal.

Edinson Cavani put Napoli in front after 12 minutes but they were pegged back when Cristian Pasquato netted for Bologna in the 38th minute. Panagiotis Kone had the final say in the 90th minute, sending Bologna through to a quarter-final against Inter Milan.

Napoli boss Walter Mazzarri rued the end of his team’s defence of the cup.