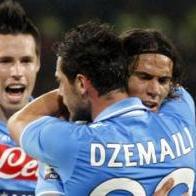 Napoli ended a run of three consecutive Serie A defeats with a comfortable 2-0 victory at home to relegation-threatened Novara on Saturday.

Edinson Cavani got the ball rolling for the hosts after 21 minutes after Alberto Fontana made a hash of clearing Ivan Radovanovic’s looping back pass.

Paolo Cannavaro coolly added a second soon after, as both goals came during the opening half.