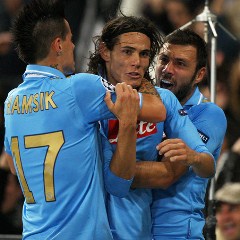 The highly-rated Uruguayan lifted the Italian side back into second in Group A with goals either side of a Mario Balotelli equaliser at the intimidating Stadio San Paolo.

City had several chances in an eventful game but Marek Hamsik also hit the post for the hosts, who dominated for long spells.

The Barclays Premier League leaders will now have to win their final game against group winners Bayern Munich and rely on a favour from winless Villarreal against Napoli to progress.

The night in Naples was another learning curve for a side who may be dominant domestically but are still off the pace at elite European level.

Cavani, Hamsik and Ezequiel Lavezzi – all of whom have been linked with City – were a handful all night in an imposing atmosphere.

The level of hostility facing City in the vast arena was apparent long before kick-off and there was little let-up in the noise throughout the game.