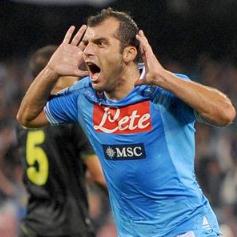 Napoli joined Juventus at the top of Serie A with a hard-earned win over Udinese at the Stadio San Paolo.

Marek Hamsik gave Walter Mazzarri’s side the lead in the 31st minute, but Giampiero Pinzi responded for the Zebrette, who simply would not lie down.

But Goran Pandev restored the home side’s lead on the stroke of half time and they defended resolutely throughout the second half to pick up their sixth win in seven Serie A matches, leaving Udinese struggling in the bottom half of the table with only one win all season.