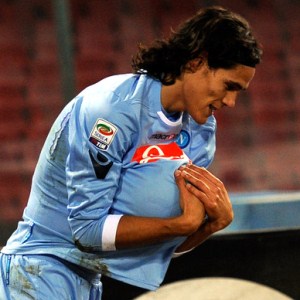 A hat-trick of headers from an inspired Edinson Cavani lifted Napoli past Juventus 3-0 at the Stadio San Paolo and into second in Serie A.

Juventus were often the match of their hosts but lapses at the back and a lack of luck at crucial moments at the front cost them dearly.

All eyes were on Luca Toni as the veteran striker made his Juventus debut having arrived from Genoa in the week.

Napoli, knowing a win would lift the club to second in Serie A, stuck to their favoured attacking mould, with Walter Mazzarri operating a 3-4-2-1 formation.