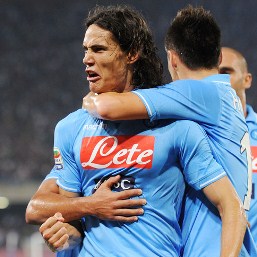 Edinson Cavani scored a super hat-trick as Napoli came from behind to beat Milan 3-1 in a manic Serie A clash at San Paolo, putting them joint-top of the nascent Italian league while leaving the stuttering champions without a win yet this season.

After Alberto Aquilani gave an injury-ravaged Rossoneri an early lead, Napoli hit back immediately as Cavani poached the first of his three goals.

With both sides exchanging chances at will, the Uruguay striker hit a wondrous curler and a belting drive to leave the visitors with only their second defeat of 2011.

Massimiliano Allegri was admittedly without several key players – Robinho, Zlatan Ibrahimovic, Kevin-Prince Boateng, Gennaro Gattuso and Massimo Ambrosini were all injured – but Napoli were superb on the counter attack, with Cavani ably supported by a buzzing midfield.

Both sides could have suffered from the Champions League hangover after tough away draws at Manchester City and Barcelona, but the encounter was anything but sluggish.