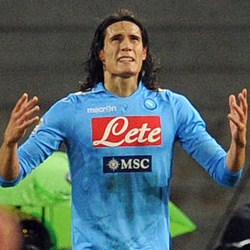 Napoli warmed up for their vital Champions League tie with Villarreal by brushing past basement boys Lecce.

Knowing that a win over the Spaniards will see them through to the knockout stages of the tournament, Walter Mazzarri’s men ensured they will head into that clash full of confidence thanks to this four-goal show at Stadio San Paolo.

They may have some concerns over their defence, though, with Luis Muriel and Daniele Corvia scoring for Lecce, although those goals were only consolations at 3-1 and 4-2.

By those points, Ezequiel Lavezzi, Edison Cavani (two) and Blerim Dzemaili had put the game out of sight for the home side.