Reports are out claiming that Napoli coach Rafa Benitez is being tipped for the Manchester United job. 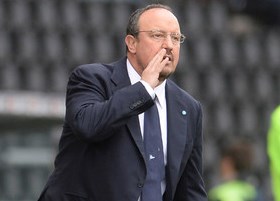 Former Liverpool midfielder Didi Hamann believes Benitez would be ideal for the post.

Hamann said to TalkSport : “He is certainly a name they should consider,”.

“They need someone with a track record who knows how to work with big players.

“He knows what is required to get into the Champions League and play a big role in it.

“Rafa Benitez is with Napoli in Italy at the moment but his family still live in the North West of England.

“He has always made it clear that he would love to return to the Premier League at some stage but the way things are going at Liverpool I don’t think he will be there anytime soon.

“I don’t think Arsenal would suit him but he and Manchester United would be a very good match.

“He had a few disagreements with Ferguson but he was only pointing out a few facts, as he would say!

“If I were a United fan I would want someone who would give you the best possible chance to get back in the Champions League.”