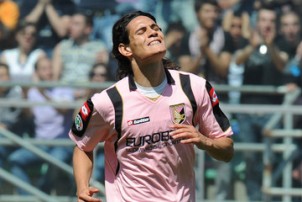 Transfer news from the Italian Serie A is out and it has been reported that Napoli have clinched the signing coup of Palermo striker Edinson Cavani.

The 23-year-old Uruguay international was keen to leave Palermo and Napoli have managed to persuade him to make the switch to the San Paolo.

Palermo president Maurizio Zamparini admitted the club had no choice but to let the player move on.

Zamparini told Radio Kiss Kiss : “The agreement between Napoli and Palermo (for the transfer of Edinson Cavani) was found,”.

“Now they are negotiating with the player’s agent the details.

“Cavani is now in Uruguay and then the leaders of Napoli will go there for the signatures.

“With the arrival of Cavani, Napoli will aim high. I’m sorry to strengthen a direct competitor, but Cavani absolutely didn’t want to stay in Palermo because there were unfortunately a couple of unpleasant incidents, and we promised to sell him”.