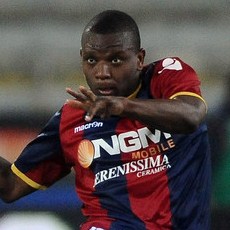 Reports are out claiming that Napoli are chasing Bologna midfielder Gaby Mudingayi.

It is said that the 30 year old Belgium international plans to leave Bologna this summer.

“I understand that there has been contact between Bologna and Napoli, whilst the profile of the player that Napoli are after is a midfielder like Gaby, and I don’t think it is inaccurate to say that over the past two seasons Mudingayi has demonstrated that he is an extremely valuable player and has become one of the top two or three midfielders in the Italian League,” declared Federico Pastorello to Radio Kiss Kiss Napoli on Tuesday.

“It seems normal that Napoli, which is a great club, look at Gaby, who cannot but give an absolute willingness to this transfer.

“Certainly with the boy we know that several teams are becoming interested, but some clubs have not taken into account that Bologna is an optimum choice, and that only if Napoli call can he not say no.”