It has been reported that Italian outfit Napoli have opened negotiations with Swansea City to sign Michu. 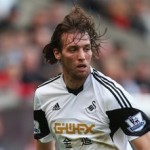 The 28 year old Spanish international has not travelled to the USA for Swansea’s tour before the new Premier League season.

Sources close to the player have told BBC Wales this is because of talks with the Italian Serie A side over a possible move.

“He scores goals and with that type of pedigree he’s always going to attract interest and rumours,” said Swans boss Garry Monk.

Fabregas Wants Arsenal To Be Consistent