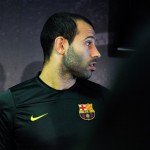 It is said that coach Rafa Benitez is eager to be reunited with his former Liverpool star.

“Given his age, it would not be a bargain, but an instant investment,” said ADL

“It depends on Barcelona and what they will do.

“Does he want to rot on the bench or join us as we re-launch and enhance Napoli?”

Xavi Confident Of Defeating Arsenal At The Nou Camp