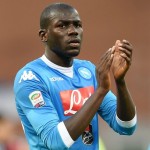 It has been revealed that Arsenal are interested in Napoli defender Kalidou Koulibaly.

The Telegraph claims that Koulibaly is on Arsene Wenger’s transfer radar.

The centre-back position is believed to be Wenger’s priority after an inconsistent season from Per Mertesacker and Gabriel Paulista.

Senegal international Koulibaly would cost in the region of £20million but Wenger has already demonstrated a willingness to make signings this summer after the arrival of Granit Xhaka .