Reports are out claiming that Napoli are chasing Chelsea defender Kurt Zouma. 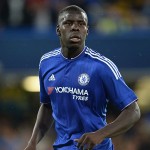 Radio Marte reported that Napoli are launching an attempt to prise Zouma away from Chelsea in January.

Napoli would like to take Zouma on-loan with the view to signing him permanently in June.

The French international has found himself a first-choice for manager Jose Mourinho in recent weeks and Chelsea are unlikely to consider a departure.

Sampdoria also failed with a move for Zouma last summer.