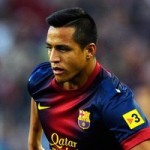 It appears that Napoli is still not done signing new players as coach Rafa Benitez has admitted that he is eager to continue shopping in the Spanish transfer market.

The former Liverpool, Inter Milan and Chelsea boss has already added former Real Madrid trio Jose Callejon, Gonzalo Higuain and Raul Albiol to his squad and according to Gazzetta dello Sport, Barcelona winger Alexis Sanchez could be next on Benitez’s radar.

The 24 year old Chile international could become available at Barca following the arrival of Neymar.

Sanchez previously played in the Serie A with Udinese and joined the Spanish champions in 2011 and made a total of 87 appearance in all competition scoring 26 goals along the way.

Ibrahimovic : Guardiola Wants Me To Stay At Barcelona