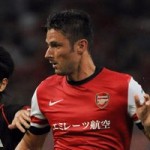 Transfer news from the Serie A is out claiming that Napoli are eyeing Arsenal striker Olivier Giroud.

Gazzetta dello Sport reported that Porto’s Jackson Martinez was the man the club’s sporting director Riccardo Bigon originally envisioned as working well with the former Real Madrid but has since move his attentions to the French international striker.

It is said that Napoli will be able to approach the north London side’s representatives during the Emirates Cup this weekend.