Napoli president Aurelio De Laurentiis has has revealed that the club is keen on Barcelona defender Javier Mascherano. 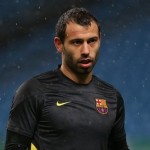 The Argentine international has been strongly linked with a return to the Premier League, with his former club Liverpool, Arsenal and Manchester United reportedly keen to acquire the 29-year-old’s services.

“We are working on it but it’s a difficult negotiation.