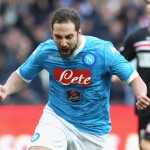 “Observing the situation from the outside, I think Higuain will be sold to raise money,” Maradona told Piùenne.

“He cannot repeat a season like this. He scored basically in every match, 30 goals. Knowing (President Aurelio) De Laurentiis, he will sell.

“But what Napoli must do with the money he brings in is build a wonderful team. Pipita gave his best to Napoli, I don’t think he can repeat this kind of form. We already saw it happen with Pocho Lavezzi.”

The Argentine international star is said to be on the radar of Arsenal and Manchester United. Man Utd In Contact With Bayern Munich For Bastian Schweinsteiger Arsene Wenger Informs Arsenal Board What He Wants For January