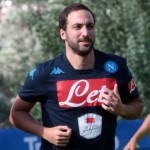 ADL discussed the initial refusal of Higuain to extend his contract.

“There was a misunderstanding with regards to Higuain. Anyone who claims he will leave is perhaps paid to say that,” blasted the president.

“He has a three-year contract. We had some talks with his brother and father, because they wanted to know the plans of the new Coach.

“We met in Venice and even considered the option of an extension. I proposed two years, they proposed one year, but there’s no rush to finalise anything. We have another three years to run as well as friendship and respect with all concerned.”

The Argentine international striker is linked with a move to the Premier League with Arsenal and Manchester United.