It has been reported that Napoli are interested in signing Pepe Reina on a permanent basis this summer from his parent club Liverpool. 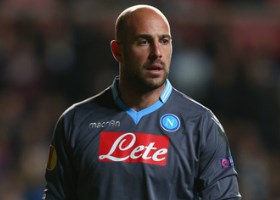 The Spanish international goalkeeper moved to Italy in 2013 on a season-long loan deal from Anfield.

President Aurelio De Laurentiis told a press conference in the wake of Sunday’s 2-0 victory over table-topping Juventus: “After yesterday’s victory I went down to the locker room and I promised the players a bonus if they can finish second.

“Then I talked to Reina and told him that he must remain with us. I want him confirmed for next season.

“He was happy, for him it was a double reward.”