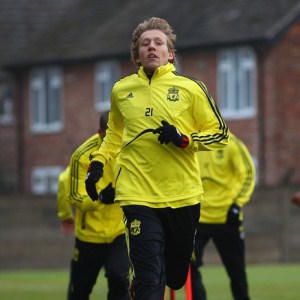 Liverpool midfielder Lucas Leiva is reportedly attracting interest from the Serie A.

Napoli, who currently sit third in the Serie A standing, is said to be keen on the former Gremio star.

The 24 year old Brazilian international is on the shopping list of Napoli president Aurelio de Laurentiis.

The central midfielder’s contract expires in 2012 and the Italians will attempt to entice Liverpool to cash in before the 24 year old is a free agent.

The Premier League giants are expected to make a decision on Lucas in the coming months.