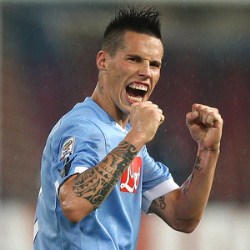 It has been revealed that Napoli president Aurelio de Laurentiis is willing to sell Marek Hamsik this summer – for €100 million.

The Slovakia international midfielder has been linked with a move to AC Milan this summer.

“The indecent proposal would have to be of €100m, otherwise he will be staying here,” the movie mogul declared.

Meanwhile, De Laurentiis has confirmed that Napoli will be taking part in a glamour friendly this summer.

“The news of the day is our game against Barcelona on August 22,” he added.

“I thank director general Fassone for sorting that out.

“It will be an honour for us to face them.”