It has been reported that Serie A club Napoli are showing considerable interest in Bayern Munich midfielder Luiz Gustavo. 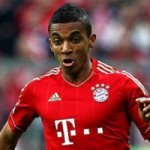 The Brazilian international midfielder is a key target for Premier League giants Arsenal but the Daily Mail has suggested that Rafael Benitez’s Napoli have joined the queue.

It is believed that Gustavo, who is determined to make Brazil’s World Cup squad, will make a decision on his future on Wednesday. He said this week that he is open to a move to the Emirates Stadium.

“I have heard about the Arsenal interest. It’s a big club we’re talking about here so of course I’d like to play for them,” he said.