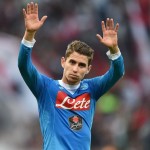 Reports are out claiming that Arsenal have failed with a bid for Napoli midfielder Jorginho.

TMW reported that the Gunners have tabled a bid, but Napoli are reluctant to sell. Arsenal may return with a second offer in the summer.

The 24-year-old has been linked with a move to north London, having been seemingly cast aside by the Italian side at the start of the season.

However, he has gone to establish himself as one of the key components in Naples as they have reached the summit of Serie A. Ryo Miyaichi : I Was Nervous Before The Game!