Reports have emerged claiming that Napoli president Aurelio de Laurentiis has admitted to fans he would be willing to sell Gonzalo Higuain. 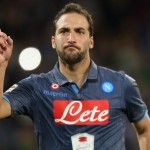 The Argentine international striker has been linked with Liverpool, Arsenal and Manchester United in recent days.

“Sell Higuain for €90 million? I’d like to sell him,” ADL told a fan in a conversation that was recorded on their phone.

“That way I can buy eight players for the club!”

Higuain has a €94 million buyout clause in his current Napoli deal.