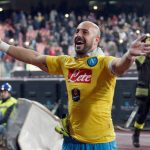 Reports have emerged claiming that Pepe Reina has emerged as a surprise target for Liverpool.

It is understood that Reina, 33, is open to a possible Anfield comeback and would ponder the opportunity if it were to arise.

Klopp recently signed Loris Karius from Mainz, to provide competition for current number one Simon Mignolet, but is believed to want the experience of Reina to fully bolster his keeping stocks.

There is also the possibility that the Reds could offload Mignolet and go with Karius and Reina as their one and two.

Reina made close to 400 appearances for the Merseyside club between 2005 and 2014 before joining Napoli on a season-long loan and then moving permanently to Bayern Munich in the summer of 2014.

Liverpool Not Interested In Selling Arsenal Target Suarez At Any Price